All Collections
Glossika Quickstart Guide
Step 5: A peek behind the scenes (and three more features)

Step 5: A peek behind the scenes (and three more features)

A look at the memory tab, the topics tab, and Glossika's skill trees

Written by Tess Yang
Updated over a week ago

This article will talk about some behind-the-scenes stuff and will also introduce a few secondary features you might eventually interact with:

All of the sentences in Glossika go through two tagging processes.

Some of your interactions with Glossika will be affected by these tags.

We'll introduce the two main systems governed by those tags (topics and skills). While we're talking about behind-the-scenes stuff, we'll also look into one system that visualizes the spaced repetition algorithms we mentioned in the third article.

Click on the "Memory" tab located in the upper-mid region of your screen to access your Memory page. 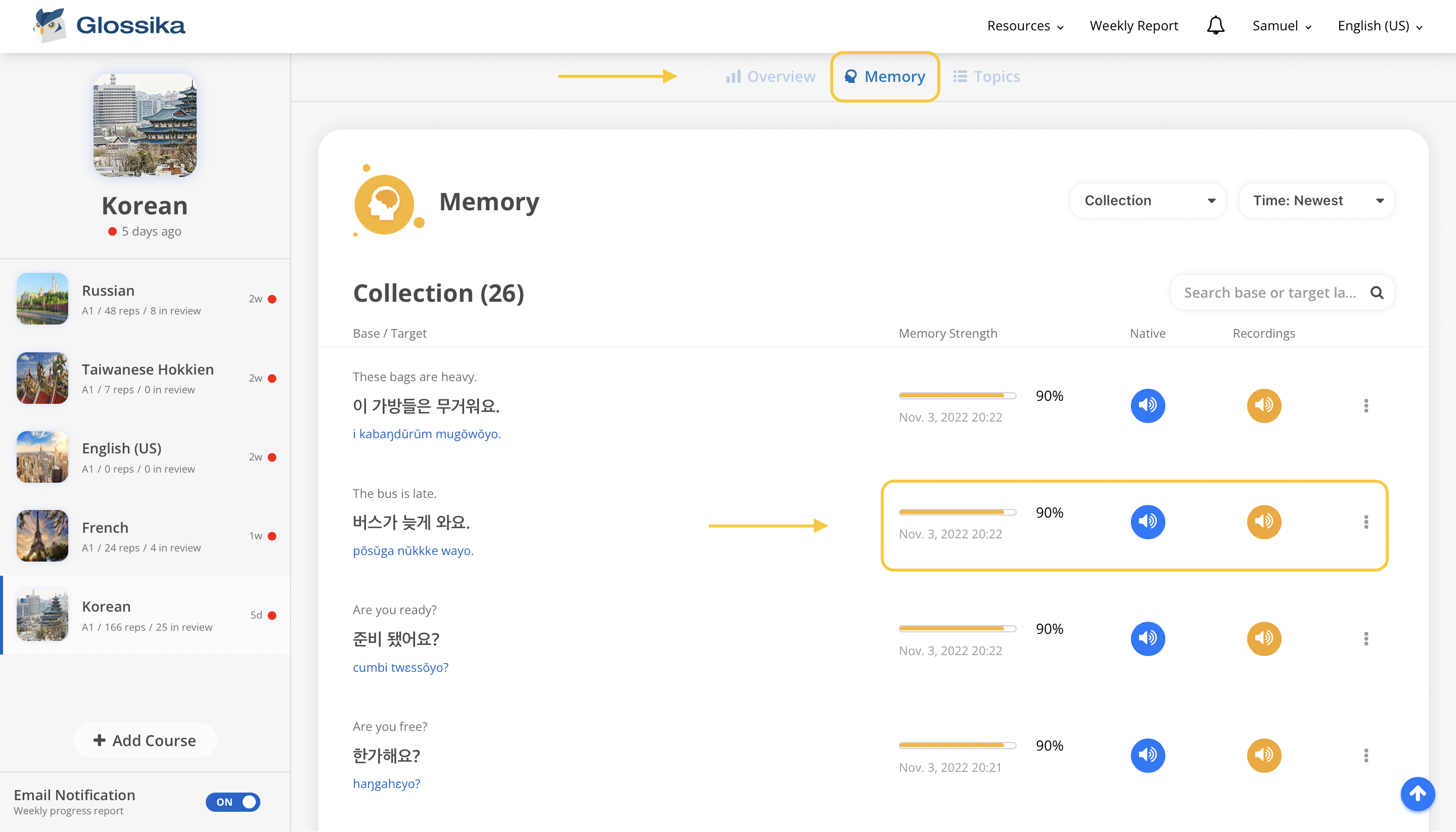 From here, you can interact with the sentences you have already learned in a few ways:

Click on the "Topics" tab located in the upper-mid region of your screen to access your Topics page. 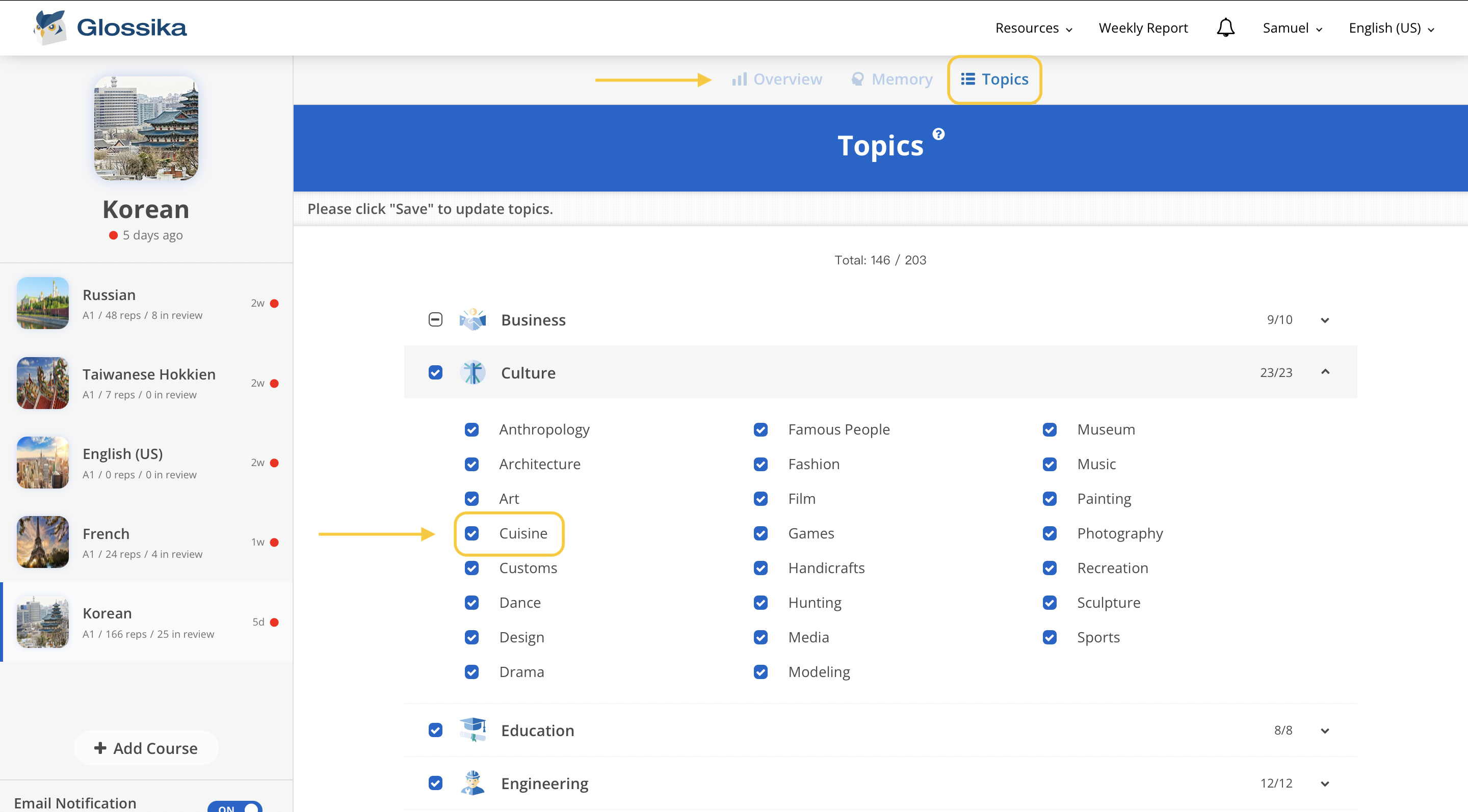 The Topics page is where you control what sort of sentences you see in Glossika, but you have to be careful with it. Unchecking topics means that Glossika has a smaller pool of sentences to assign you, which in turn means that your difficulty curve will be steeper and that you will run out of content more quickly.

To be safe, for the time being, we recommend seeing the topics list as a place to indicate that you definitely don't want to see certain types of sentences. If you're very squeamish, for example, you might understandably wish to disable the surgery topic. Go ahead and disable it.

While you might think about disabling topics like electrical engineering or military administration because you're a beginner and that's not what you need right now — don't. We know beginners don't need these topics. You won't begin seeing them until the ~B2-high level, at which point you'll be confident enough in the language that some of the more common electrical and military terms might actually be useful to you (because they'll occasionally show up in the content you're consuming).

(Note: Topics are exclusive in nature. If a given sentence has topics A B and C, but you previously disabled topic B, you would not be given this particular sentence because it contains topic B — even though you might have enabled topics A and C. This is why we recommend leaving as many topics enabled as possible.)

At the bottom of your dashboard, you'll notice a shelf entitled "My Skills". 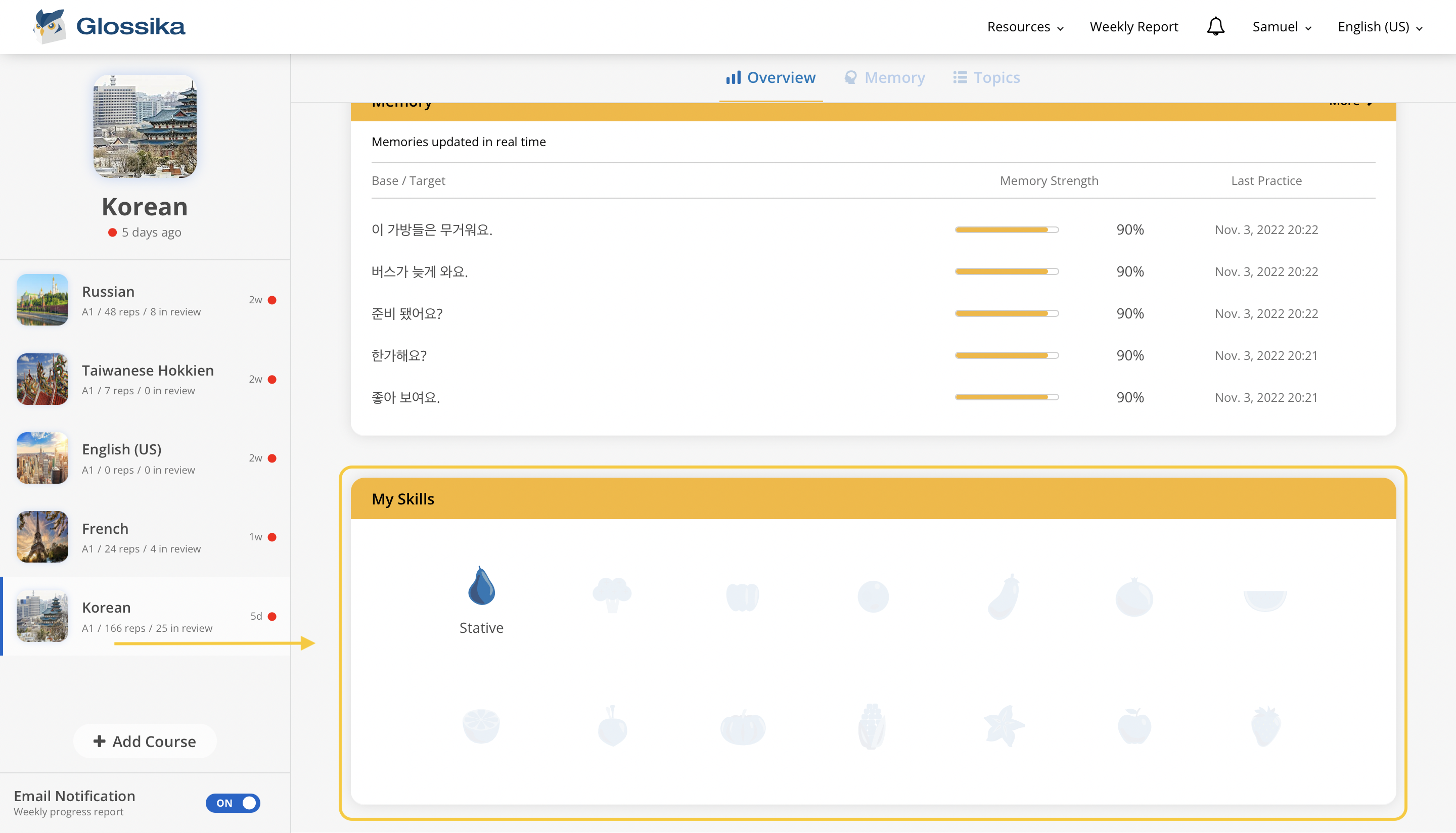 Each time you graduate to a new level in Glossika, the system will give you sentences of your new level which are very simple: they are either a subject plus a stative verb or a subject plus a copula and an adjective. For example, these bags are heavy. In addition to letting us control the complexity of sentences, this approach will help your brain to tease out the patterns behind certain types of sentences. You might not recognize the "formula" right away, but after you've seen several dozen variations on essentially the same sentence structure, you'll get a feel for the underlying logic and begin being capable of generating your own sentences.

As you progress through a level — say, you make progress through A2-high — you'll unlock more skills. This means that you'll see both a wider variety of sentences and also that you'll see longer / more complex sentences. In more practical terms, here are examples of the sorts of sentences you might see as you move from the very beginning of a level toward the very end of a level.

For a full explanation of Glossika's skills section, see this video (10min).

Try Glossika for free now!
Did this answer your question?